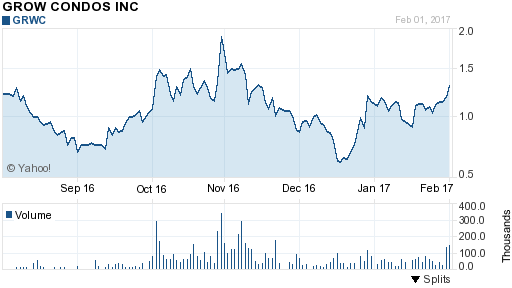 Grow Condo’s in the Media

A southern Oregon real estate company looking to capitalize on the marijuana boom is planning to build a multimillion-dollar growing and processing facility in Eugene that could house more than 30 different pot ventures.

The Eugene Register-Guard reports that Grow Condos has submitted a proposal to the city of Eugene for review.

The four-building marijuana complex would have 50,000 square feet of potential growing space divided into 32 units, which would be sold or leased by the publicly traded company.

The 22-foot-high units could be expanded by combining spaces or adding mezzanine levels, which could double the amount of floor space.

Grow Condos CEO Wayne Zallen said the company has a similar facility in Eagle Point, where it’s based. He said millions of dollars have already been raised to build the Eugene project and other potential complexes.

The explosion in marijuana growing has caused the Eugene-Springfield warehouse market to get tight, according to the Register-Guard.

“That industry has taken a lot of space off the market,” said John Brown, a commercial real estate broker with Evans Elder & Brown in Eugene.

Zallen told the Daily Journal of Commerce that his company is also looking for sites in Alaska and California. He said Washington is less attractive because marijuana laws here are more restrictive and unpredictable.

The condos will be shells with hookups for plumbing and electrical systems. The Eugene site will have extra security as well, such as cameras and a six-foot chain link fence with screening around the buildings.

The company estimates new owners may spend another $250,000 outfitting their units with lighting, shelves and other features.

Zallen said he prefers selling rather than leasing the units because he doesn’t want to be a landlord.

“People come in (to leased units) and put in such an investment,” he said. “When they leave they lose their investment.”

But that doesn’t mean he’s looking to walk away after he closes a sale. The company offers an array of consulting services, such as help with design and build-outs. They’ll even run a grow operation for the new owner.

“I’m a grower myself,” Zallen said. “We have a team that will help with what the customer needs.”

The company says on its website that the best opportunities in the marijuana industry are in support services such as real estate, education and consulting.

Grow Condos also is looking another business opportunity in marijuana: tourism. The company has a new division called Smoke on the Water that will create herb-friendly campgrounds and resorts.

Grow Condos is looking to acquire RV parks and make minor improvements, such as adding luxury camping units. The parks would offer pot farm tours and invite growers to give seminars.

“Depending on where we buy, we’d have a dispensary on it as well,” Zallen said.

The company “just getting a contract on its first (camping ground) in southern Oregon,” he sad.

This article includes material from The Associated Press.